Written at the top: This article, as the title states, only explores the criminal direction of online piracy. Trouble some people not to associate recent events with this article. If there are two words that online

Written at the top: This article, as the title states, only explores the criminal direction of online piracy. Trouble some people not to associate recent events with this article.

If there are two words that online writers hate the most, it must be “piracy”.

Every time a copyright owner stands up to fight against piracy, there will always be countless web writers celebrating, but unfortunately, the number of pirated websites on the Internet has never decreased because of a very small number of blows. Here, from multiple perspectives, discuss why piracy exists and how to combat piracy.

First, the crazy growth of piracy.

As I wrote in my previous post, from the moment when online texts are fully turned to charging, it is doomed that the piracy industry will definitely exist. Although genuine platforms are constantly upgrading their technology in order to add obstacles to pirated websites, the pirated content of web articles has never been reduced due to the technological innovation of the platforms.

The reason is that there are two main factors for the arrogant growth of piracy, one is profit, and the other is connivance.

This idiom, “Fa does not blame the public”, which has been around for hundreds of years, has been regarded as the golden rule by practitioners in the piracy industry. In order to be able to cover up their own light in the numerous pirated websites. This has undoubtedly caused some troubles to the crackdown on piracy. It is difficult for the platform to identify the source of piracy from countless pirated websites. Even if a few websites are fortunately destroyed, more piracy technology researchers will come forward, and hide yourself deeper.

Dragon Ball randomly found a forum for black production, and searched for the keyword “novel collection” and got 29 results (the key information in the picture has been hidden by Dragon Ball) 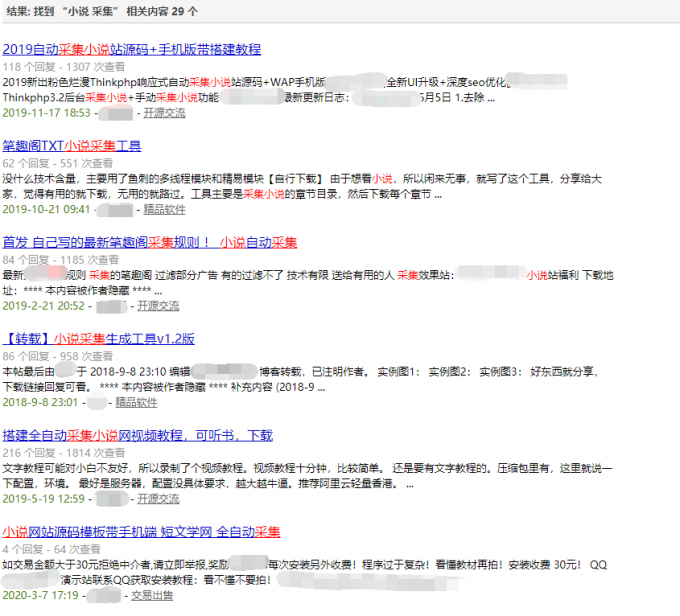 It can be seen from these results that most pirated websites are only collecting pirated copies. They only need to pay for servers and domain names, and in addition to attracting traffic to the website, they can receive advertising dividends.

This almost cost-free piracy model has led to the current situation of piracy.

And most platforms are often very powerless in the face of pirated websites that are springing up like mushrooms. After all, all those who do pirated web articles know that it is illegal to do so, so they hide their information deeply. If they don’t dedicate their energy to excavating, it is difficult to excavate their true identities.

In this case, most platforms choose to turn a blind eye. They can only hope that pirated websites can attract traffic to the main site, and convert these diverted readers into their own subscribers.

I believe that most of the authors of Hunlongkong have had the experience of reading pirated online texts, and I also admit that many of today’s genuine readers are converted from pirated versions. But how much the conversion rate is, it is not known. However, I personally think that this conversion ratio will definitely not exceed 10:1.

2. The struggle between genuine and piracy

In my memory, the biggest achievement in combating piracy in recent years is to shut down pirated post bars.

Tieba’s hand-playing group is the most criticized place by the old writers who entered the industry 10 years ago. Among the post bars of major web articles, countless pirated websites use crawlers to stand guard day and night, hoping to collect free hand-plays from post bars as quickly as possible. Therefore, when these pirated Tieba were shut down, most of the authors at the time believed that the rampant situation of online piracy would be alleviated, but later found that Tieba was banned, making the phenomenon of piracy even more uncontrollable.

From the current point of view, at that time, under the restriction of post-battle teams, the update time of pirated online articles was often delayed by about 20 minutes compared with the genuine ones. Those 20 minutes became the difference between genuine readers and pirated readers.

After Tieba was banned, pirated users were diverted to other pirated websites on a large scale. In order to survive, pirated websites began to use subscription crawling methods, which delayed 5 minutes or even synchronized updates. Moreover, due to the weak social attributes of pirated websites, the proportion of pirated readers’ stimulating consumption due to genuine readers has also been greatly reduced.

Then Feilu was welcomed by the authors with its anti-piracy technology. And Feilu’s anti-piracy technology is actually very simple, that is, insert some meaningless characters into the text, and after summarizing these characters, they will correspond to a certain Feilu account. After Feilu obtained these meaningless characters from pirated websites and found the corresponding accounts, these accounts would be banned.

This approach of Feilu added a huge cost to pirated websites, which led to the fact that the piracy of Feilu’s novels was the least on the Internet at that time.

However, due to the anti-theft mechanism of Feilu, another kind of black product has also been operated, that is, Feilu account theft. This has also caused people to post on the Internet in the past few years, saying that their Feilu account was inexplicably consumed or even banned.

Later, the starting point developed an anti-chapter mode, that is, when the VIP chapters are released, they are first replaced with other content, and then automatically become genuine chapters after a period of time. However, because this model greatly affects the user experience, and does not have much impact on piracy, it eventually comes to nothing.

Third, the direction of piracy.

As I said in another post, if you want to eradicate piracy, there is only one situation that can be achieved, and that is a large-scale criminal crackdown. After I published that post, some familiar website staff talked to me privately and asked me about the preparations for criminal strikes and the work to be done. I answered them one by one, and promised that if the other party needed help , I can provide some technical support. But since the other party is not the management of the website, so far the other party has not contacted me again.

Here, Dragon Ball also wants to conduct a popularization of these legal affairs that focus on civil and commercial law, how to obtain evidence and how to crack down on a pirated website.

1. How to catch the website operator from the details.

The Internet is not like the real world, any operation on the Internet will leave some traces. If you want to catch the operators of these websites, you need to start from several aspects.

The first is the historical whois of the domain name. When some operators set up pirated websites, it was completely out of ad hoc intentions. Therefore, in terms of personal information protection, it will be relatively careless, and the historical whois of the domain name will leave some indelible traces on these careless operators. If you want to crack down on these operators, you must make good use of the value of these traces.

The second is the change history of the domain name pointing to the server. Most pirate sites don’t always use one server, they always have a variety of reasons, all kinds of reasons to change server operators. Regardless of whether it is domestic or overseas, many regular operators are afraid of being involved in some unnecessary lawsuits, so they will add a statement about copyright infringement in the user agreement of the website. The legal affairs of the genuine platform can completely use this to send a copyright notification letter to the operator, or the radical point directly sends a lawyer’s letter and issues a relevant copyright certificate (that is, the contract between the author and the platform). In order to avoid their own risks, some operators will choose to transfer the responsibility to the actual operator of the pirated website, that is, to provide some information of the operator of the pirated website to the genuine platform. The genuine platform can completely use this information to aggregate into a portrait, and then proceed to the next steps.

When reporting a case, you must first make a brief introduction to the case, which includes about how much content of your own platform is on this pirated website, about how much traffic this pirated website has, and how much damage it is expected to cause to your own platform. In general, this loss can be exaggerated with evidence. For example, a book on this website shows 1 million clicks, so when reporting the case, you can count all the million clicks as your own VIP subscription loss. Probably, the genuine single-chapter subscription price * one million.

At this point, don’t think that after the public security organs file a case, you have nothing to do with yourself. What to do now is to fix the evidence against the pirated website you reported.

As mentioned earlier, the verification of damages in the early stage of reporting needs to be exaggerated, but after successful arrest, the real verification and recovery of damages need to be started before the procuratorate transfers the prosecution.

At this time, it is recommended to find an accounting firm with judicial audit qualifications to check the losses caused by the pirated website to the genuine platform, and issue a relevant audit report with legal effect.

Of course, if the public security organs are willing to cooperate, the step of verifying the damage can be skipped directly, and the suspect will take the initiative to return the stolen goods and seek forgiveness. Personally, I recommend this method, which is simple and efficient, and also has a deterrent effect.

6. Among the laws and judicial interpretations applicable to criminal crackdowns, the

most applicable law to crack down on online piracy is Article 217—the crime of copyright infringement.

The elements of this crime are simple and the regulations are relatively general, so it is very suitable for combating the use of pirated websites.

Followed by Article 225 of the Criminal Law, the crime of illegal business operations.

This is actually a pocket crime. Compared with the crime of copyright infringement, the crime of illegal business operation only requires the actual profit of the pirated website operator to exceed 20,000 to be convicted, but the specifics still need to be communicated with the public security organs.

Both of these are computer-related charges. If pirated websites use tools such as crawlers to crawl server data, or use website loopholes to obtain genuine novel content, these two charges apply. Which one applies will need to be analyzed on a case-by-case basis.

4. Written at the end